Urban Chicken Coops
By: www.CadConDesign.com
Posted by CAD-CON at 8:05 AM No comments: 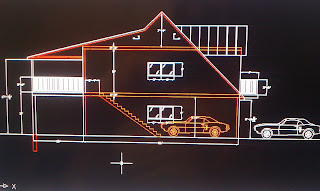 The art and design that goes into making buildings is known as architecture. To communicate all aspects of the design, detailed drawings are used. In this field, the term plan is often used when referring to the full section view of these drawings. Architectural drawings describe and document an architect's design.


Engineering can be a very broad term. It stems from the Latin ingenerare, meaning "to create". Because this could apply to everything that humans create, it is given a narrower definition in the context of technical drawing. Engineering drawings generally deal with mechanical engineered items, such as manufactured parts and equipment. 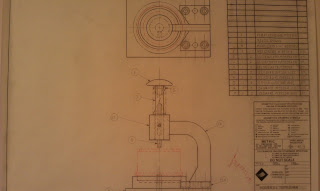 drawings are usually created in accordance with standardized conventions for layout, nomenclature, interpretation, appearance (such as typefaces and line styles), size, etc.

Its purpose is to accurately and unambiguously capture all the geometric features of a product or a component. The end goal of an engineering drawing is to convey all the required information that will allow a manufacturer to produce that component.

The applicant for a patent will be required by law to furnish a drawing of the invention whenever the nature of the case requires a drawing to understand the invention. This drawing must be filed with the application. This includes practically all inventions except compositions of matter or processes, but a drawing may also be useful in the case of many processes. 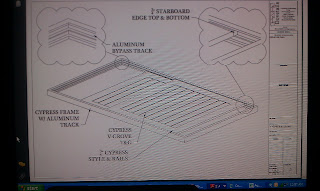 The drawing must show every feature of the invention specified in the claims, and is required by the patent office rules to be in a particular form. The Office specifies the size of the sheet on which the drawing is made, the type of paper, the margins, and other details relating to the making of the drawing. The reason for specifying the standards in detail is that the drawings are printed and published in a uniform style when the patent issues, and the drawings must also be such that they can be readily understood by persons using the patent descriptions. 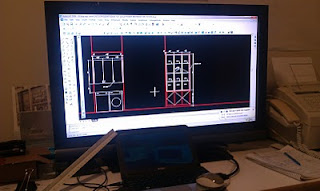 Today, the mechanics of the drafting task have largely been automated and accelerated through the use of Computer Aided Design systems (CAD).

2D CAD systems such as AutoCAD replace the paper drawing discipline. The lines, circles, arcs and curves are created within the software. It is down to the technical drawing skill of the user to produce the drawing. There is still much scope for error in the drawing when producing first and third angle orthographic projections, auxiliary projections and cross sections. A 2D CAD system is merely an electronic drawing board. Its greatest strength over direct to paper technical drawing is in the making of revisions. Where as in a conventional hand drawn technical drawing, if a mistake is found, or a modification is required, a new drawing must be made from scratch. The 2D CAD system allows a copy of the original to be modified saving considerable time. 2D CAD systems can be used to create plans for large projects such as buildings and aircraft but provide no way to check the various components will fit together.

3D CAD systems such as Pro/ENGINEER first produce the geometry of the part, the technical drawing comes from user defined views of the part. Any orthographic, projected and section views are created by the software. There is no scope for error in the production of these views. The main scope for error comes in setting the parameter of first or third angle projection, and displaying the relevant symbol on the technical drawing. 3D CAD allows individual parts to be assembled together to represent the final product. Buildings, Aircraft, ships and cars are modeled, assembled and checked in 3D before technical drawings are released for manufacture.

Both 2D and 3D CAD systems can be used to produce technical drawings for any discipline. The various disciplines; electical, electronic, pneumatic, fluidic, etc., have industry recognised symbols to represent common components.

BS and ISO produce standards to show recommended practices but it is up to individuals to produce the drawings. There is no definitive standard for layout or style. The only standard across engineering workshop drawings is in the creation of orthographic projections and cross section views.

Drafting can represent two dimensions ("2D") and three dimensions ("3D") although the representation itself is always created in 2D (cf. Architectural model). Drafting is the integral communication of technical or engineering drawings and is the industrial arts sub-discipline that underlies all involved technical endeavors.

In representing complex, three-dimensional objects in two-dimensional drawings, the objects can be described by at least one view plus material thickness note, 2, 3 or as many views and sections that are required to show all features of object.
Posted by CAD-CON at 3:41 PM No comments:

Drafting Manually or by instrument 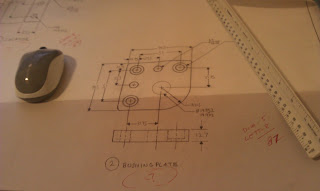 The basic drafting procedure is to place a piece of paper (or other material) on a smooth surface with right-angle corners and straight sides—typically a drawing board. A sliding straightedge known as a T-square is then placed on one of the sides, allowing it to be slid across the side of the table, and over the surface of the paper.

"Parallel lines" can be drawn simply by moving the T-square and running a pencil or technical pen along the T-square's edge, but more typically the T-square is used as a tool to hold other devices such as set squares or triangles. In this case the drafter places one or more triangles of known angles on the T-square—which is itself at right angles to the edge of the table—and can then draw lines at any chosen angle to others on the page. Modern drafting tables (which have by now largely been replaced by CAD workstations) come equipped with a drafting machine that is supported on both sides of the table to slide over a large piece of paper. Because it is secured on both sides, lines drawn along the edge are guaranteed to be parallel.

In addition, the drafter uses several tools to draw curves and circles. Primary among these are the compasses, used for drawing simple arcs and circles, and the French curve, typically a piece of plastic with complex curves on it. A spline is a rubber coated articulated metal that can be manually bent to most curves.

Drafting templates assist the drafter with creating recurring objects in a drawing without having to reproduce the object from scratch every time. This is especially useful when using common symbols; i.e. in the context of stagecraft, a lighting designer will typically draw from the USITT standard library of lighting fixture symbols to indicate the position of a common fixture across multiple positions. Templates are sold commercially by a number of vendors, usually customized to a specific task, but it is also not uncommon for a drafter to create their own templates.

This basic drafting system requires an accurate table and constant attention to the positioning of the tools. A common error is to allow the triangles to push the top of the T-square down slightly, thereby throwing off all angles. Even tasks as simple as drawing two angled lines meeting at a point require a number of moves of the T-square and triangles, and in general drafting can be a time consuming process.

A solution to these problems was the introduction of the mechanical "drafting machine", an application of the pantograph (sometimes referred to incorrectly as a "pentagraph" in these situations) which allowed the drafter to have an accurate right angle at any point on the page quite quickly. These machines often included the ability to change the angle, thereby removing the need for the triangles as well.

In addition to the mastery of the mechanics of drawing lines, arcs and circles (and text) onto a piece of paper—with respect to the detailing of physical objects—the drafting effort requires a thorough understanding of geometry, trigonometry and spatial comprehension, and in all cases demands precision and accuracy, and attention to detail of high order.

Although drafting is sometimes accomplished by a project engineer, architect—or even by shop personnel such as a machinist—skilled drafters (and/or designers) usually accomplish the task and are always in demand to some level.
Posted by CAD-CON at 3:29 PM No comments:

A sketch is a quickly executed freehand drawing that is not intended as a finished work. In general, a sketch is a quick way to record an idea for later use. Architect's sketches primarily serve as a way to try out different ideas and establish a composition before undertaking a more finished work, especially when the finished work is expensive and time consuming.

Architectural sketches, for example, are a kind of diagrams. These sketches, like metaphors, are used by architects as a mean of communication in aiding design collaboration. This tool helps architects to abstract attributes of hypothetical provisional design solutions and summarize their complex patterns, hereby enhancing the design process. 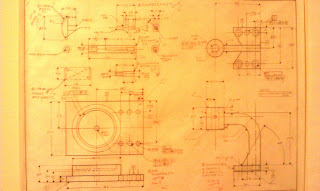